Yes, I’m finally getting back to it, part three. I’ve given you the context, but the reason you needed the context was for this part. I had a dream the other day, I don’t generally dream about places I’ve lived except the previously mentioned house I lived with my favourite housemate “B”.

For a few years I lived there alone with B and after a year of the house being in some form or other of needing repairs after a horrible storm, where I was home alone trying to prioritise if I rescued my thing’s or B’s (The answer is both, but mine first) and the last few years (we were there four years all up) my then boyfriend moved in, making it cleaner and cheaper.

But I dream about it sometimes, crazy dreams where I’m in my old bedroom, on a bed that isn’t made, the bed is higher off the ground and I’m leaning back against pillows and there are two young children (not mine, I don’t have any) playing on the bed.

My mum is out and girls are on the pillows around me. There are other details I recall from this dream too, but don’t seem relevant and I remember them for weeks without any idea why this seems important to revisit.

I’ve recently increased my very mild anti-depressants to help with my “Crazy Bitch Hormones” and sleeping problems. Although the dreams are getting weirder and my desire to hurt people has not diminished.

I’m debating with whether this as the happiest time in my life and this is why my subconscious returns there? But the dreams are always vivid and immaculately detailed.

Why am I hiding under the round formed dining table in the room that was B’s bedroom? What am I even doing inside? How can they not see me? 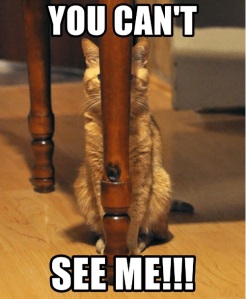 Can the manufacturers of anti-depressants get this shit sorted out? I never took drugs in the 90’s, so it’s all new to me and I don’t like it.

Sort this shit out please! 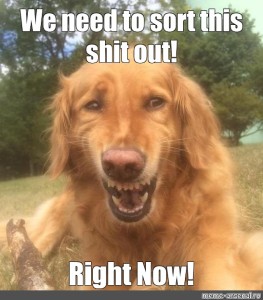 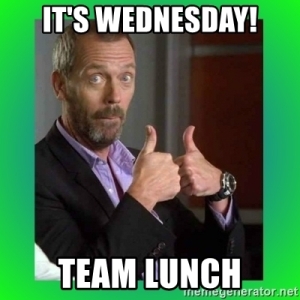 Well, time to confess. I start this post Tuesday night before going to bed so I can get a head start on everything that happens Wednesday. I do much prep work every day so the following day or days runs to plan.

Remember that migraine I had a week ago? Yes? Still got it! My GP would normally give me a jab in the ass of Tremadol. I always joke I’ll have it in the left glute please since I don’t feel it as much. Tremadol is high up in the food-chain of opiates. An injection normally knocks me out within half an hour so I have to hurry up and get home to bed. Tuesday after a big day in the city I got home just before 5pm. I took a Tremadol tablet (slower acting) and went to bed. Got up at 7.30pm, having not slept and still with the migraine.

There is no God!

It’s much earlier than I normally tap this out on my iPad and I might be lucky if I make it to midnight and I have trouble getting to bed or sleep before 1am. Don’t see the point anyway, since the street cleaners come around from then on. I failed to mention last week I found that pine-orange mushrooms have finally come into season. As a family when I was a kid, we would go to the pine-Forrest’s an hour away from home to pick them around the Easter weekend when the season started.

So, to be fair tonight’s dinner will be a very simple fry-up of potato chips a capsicum and just a few of these mushrooms cut up like fat chips. So simple, so tasty and again, like the prickly pear I can’t describe what the pine orange mushrooms taste like. I can tell you they do give you slightly weird dreams but considering the antidepressants I’m on already gives me those, that doesn’t mean much. 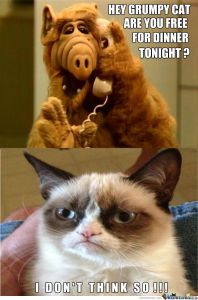 People often comment that I seem to be ok(?) about my disability. I prompt to explain how they mean this? And they suggest I don’t seem depressed, I tell them I’m self-medicated. Then there’s the assumption I’m mean, I smoke pot. I have never so I explain I’m on just the right amount of antidepressants. I’m on a small dose enough to keep me emotionally even without disturbing my sleep too much. Because they can. 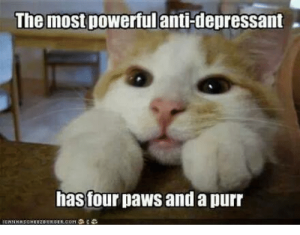 Did not get to have lunch today, despite going to bed by 11pm! (it was a miracle) I slept on and off all night. I still felt seedy so had a kip before coming out instead of lunch. Here is a photo instead of the pine orange mushrooms that will be part of tonight’s dinner.

It’s such a simple greeting “How are you?” I get asked it at all my regular stops and appointments. I often get asked the wog version – “How are you? Good.” So they answer it for me also. I just agree. People just presume I am good and I let them believe that because if I was blunt and honest they might be afraid to ask me in the future.

Someone once told me to be honest and tell people the truth. I put this in to practice with someone who deserved to be told the cold hard truth. It was a friend who only see when his life obviously crazy/busy, still has a better outlook than mine right now. I see this guy every few years only and he is more about the promises than actual reality.

So, I was blunt and I told him I was on anti-depressants and he told me straight back he was too!

In reality, he is on that knifes edge when he has invested serious cash in a business and he’s waiting to see if it pays off. Some of the success hinges on their choice in location, which is always a gamble.

But through the course of our last catch up I became aware I’d not been considered worthy of an invite to his 40th! Nor, despite being his friend for about 15 years, did not get invited to his wedding!

Let me impress upon you when his last relationship fell apart, I was the ‘friend’ he called every fucking day with the same “poor-me” issues.

So we’re both on anti-depressants and I decide to tell him I’m on the PILL! He is startled for a second and I think he is thinking I’m getting very, very lucky, so I point out in my 40 years I’ve never been on the PILL and I’m only on the PILL now, so once a month I don’t burst into tears at everything. I’m on the PILL because I’ve got crazy hormones!

That’s no way to live.

Sometimes I think I should create one day a year, where I’m brutally honest with everybody! And there should be no consequences…

I don’t know if I got to the point I started to make when I first sat to write this, but I think I did still succeed to make a point.